I started working with computers back in the 1970's when my dad would take me in to his office where he worked as a computer programmer and explain to me how the computers worked and let me feed punch cards into the massive computer in the room attached to his office.

That was where I played my first video game, a small ASCII game my dad called Snoopy and the Red Baron that was on a terminal in his office.

Below are business cards from his early days at the company, and the cards he had when he finally left the company to move us all back to Alaska in 1980. 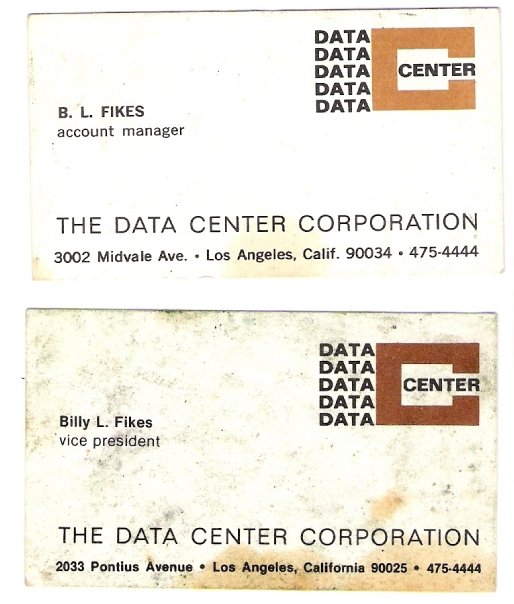 We got our first computer in the 1980's, a Vic-20 that my dad taught me and my brother programming on so we could build our own video games.

I spent hours with graph paper creating 16 bit characters to program in, and so much time going through computer magazines for the programs they had in them that you could type into your system.

I learned BASIC and C programming languages, as well as how frustrating it can be to have to hunt through hundreds, or thousands, of lines of code for a misplaced comma instead of a period or a colon instead of a semi-colon.

It was also in the 80's that I got my first computer when I bought myself a Commodore 64.

Attending Job Corps in the late 80's I took secretarial training thinking they would train me to use computers... alas, they did not think computers would have a place in the offices of the future, so trained me on electric typewriters. I spent most of my spare time in the computer lab. When I graduated the secretarial instructor and I went though the book of job descriptions and determined the closest match for my skills with computers was Terminal Systems Operator.

I went to college in the 90's, pursuing a Small Business Administration degree, but I only completed two years of college before life sent me in another direction.

During the 90's I continued my off and on obsession with playing video games, but had got out of making my own. Most of my efforts went into studying writing or film making.

Finding Blender got me seriously into making 3D models and I have followed that passion off and on ever since.

Life took a major turn for me in 2001 when my dad suffered a major stroke that left him half paralyzed and I became his primary care provider.

My mom passed away in 2008, then almost exactly two years later, in 2010 my father passed away. That led to a two year battle to try to keep the home I had lived in for over 20 years, but I lost the house in 2012 because of having been given misinformation and having been lied to by the people I had thought were helping me save my home.

Since losing my home in 2012, I have lived in a small shack setup in rural Alaska.

I started streaming on Twitch in 2019, with an official launch in January 2020, although I have had a Twitch account for much longer than that.

My hope is to make streaming, 3D creation, and writing my full-time jobs. And I want to continue to meet more amazing people and build a diverse and supportive community. Not just in terms of types of people, but also in terms of their interests and passions.

This is my logo, made in the 1980's for a videography business I had been wanting to start when I was in my teens.